Breaking news: Vanuatu Deputy Prime Minister Karshakau: A citizen passport for economic investment, we will provide a yellow passport instead of a green passport for ordinary citizens 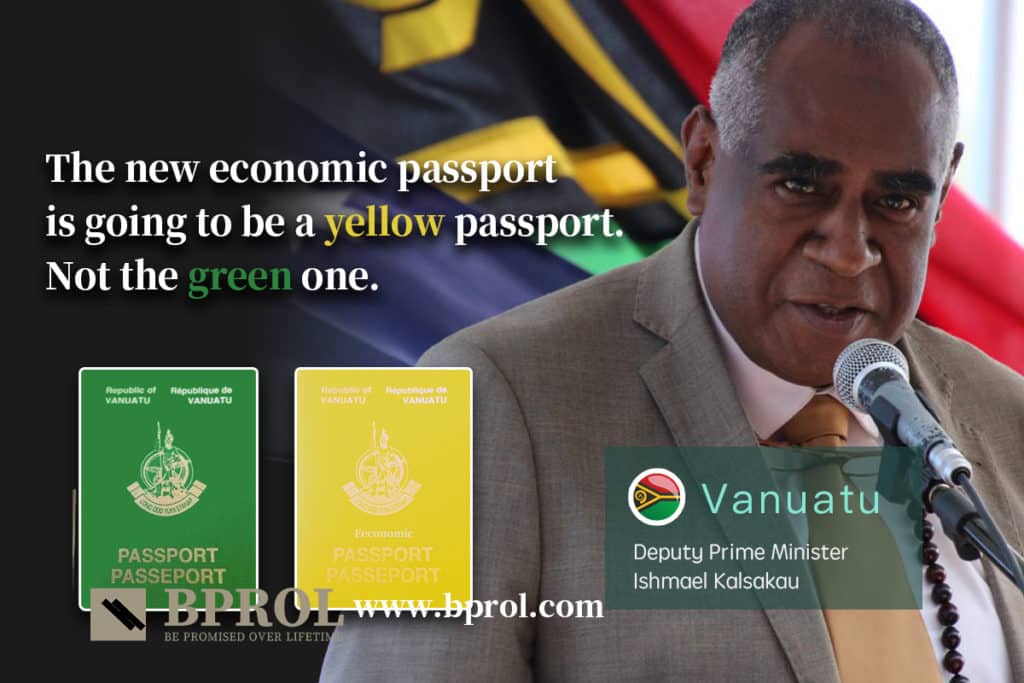 There is an uproar at this news that has not been officially made public. In recent years, citizenship investment donations have become an increasingly important source of income for Vanuatu. This year, Vanuatu has had record sales. As of mid-August, Vanuatu had received approximately US$84.6 million in income through the sale of citizenship in 2020, a rare economic achievement made during a financially tight year.

The Vanuatu Passport Project is approved with 100% guarantee and is exempt from submitting a crime-free certificate. Only a donation of US$130,000 has attracted a large number of customers in the past few years. At first, the government did not have problems with the project until later there were problems with applicants However, Vanuatu not only did not ban its application, but made a fortune from it until it was continuously warned by the European Union that its project would affect border security, and in July last year, Beijing went to Vanuatu to arrest people. The issue of the Vanuatu citizen passport project has finally become an unconcealable fact. On September 18, 2020, Vanuatu’s Deputy Prime Minister Ishmael Kalsakau said in an article by an international lawyer that he would admit that there is a problem and the government must protect Vanuatu. For the integrity of citizens (green passports), as a distinction, the passports of economic citizens will be represented by yellow passports instead of green passports. In the future, economic citizens of Vanuatu may fully hold yellow passports. The Vanuatu government is looking for self-protection. International border control will directly recognize it as a "sold" yellow passport, which is different from a green passport with full citizenship.

A passport is a travel document issued by the government of a country or region to its citizens. It is used to certify the holder’s identity and nationality so that it can enter and leave the country and travel in foreign countries. It is also used to request relevant foreign authorities to grant the licensee Passport convenience and protection. The passport is related to the right to be legally protected abroad and the right to enter the home country. Therefore, the passport should not be sold independently to foreigners in exchange for monetary benefits. The holder uses a Vanuatu passport but is not a Vanuatu passport Citizens not only cause security concerns in the international border control, but also often try their passports to open accounts in offshore banks, but because non-citizens make it difficult for financial institutions to comply with the OECD CRS principles, various security and financial and tax issues make people Worry.

Choosing a passport program must start with nationality, first obtaining full citizenship, and then applying for a passport is a legal procedure.

article:How to apply for a valid Commonwealth passport

Which country is safe for passport immigrants?

Comparison of existing naturalization programs can refer toBCBIC (https://passport.bprol.com), The following four indicators are the conditions for a good citizenship by investment project:

In the previous video, an ordinary passport is ten years at a time (the first time in Antigua is five years), plus passport renewal and some administrative tasks, if the project has not been more than twelve years old, it will feel uncomfortable to transfer assets to this identity This kind of practicality. Which projects are more than twelve years old can refer to my video.

In addition to the projects that the government has legislative guarantees, the level of intermediaries and agencies is also very important. The government guarantees the validity period of this identity. The intermediary agency determines how the client understands the project and also determines which customer groups will be attracted. Let us see Search results for Vanuatu on Baidu:

The Vanuatu project only officially started in 2014. One of the two intermediaries said that they have been in business for ten years and the other started in 2012. Obviously these are false advertising information, but because overseas information is blocked in China, they have become intermediary companies. Able to speak freely,If Vanuatu attaches importance to the long-term development of the project, how can it allow false and unreliable information to be advertised on Baidu?

After citizens are legally naturalized, they should be granted permanent residency and work rights, which means that these citizens can choose to use these countries as tax jurisdictions and respect relevant regulations as tax planning. More high-end citizenship by investment programs such as Dominica provide complete citizenship and tax residency status. reference:Those with Dominica citizenship can also own these documents to facilitate overseas asset management and offshore identity security planning.

Which country is safe for passport immigrants?

As early as a year ago, the three projects in Vanuatu, St. Kitts and Turkey were already facing severe challenges. Large Turkish developers went bankrupt and exchange rate issues. St. Kitts dropped prices three times in a year. Vanuatu was already distinguishing the colors of its passports....Know yourself The first step is the need for free travel and financial security. The two most common needs are the quality of nationality, the legality of opening overseas accounts to avoid CRS,Legal tax saving. Hold a stable and long-term citizenship, avoid letting investment fall into the ocean, and grasp the time when the epidemic is raging and turbulent.Offshore applicationThe confidentiality of handling procedures is also extremely important.

Be careful, four lies about buying a passport

Dominica passport to open a company to work in the EU

© 2020 — BPROL.COM All rights reserved
Created in EUROPE AND CARIBBEAN.